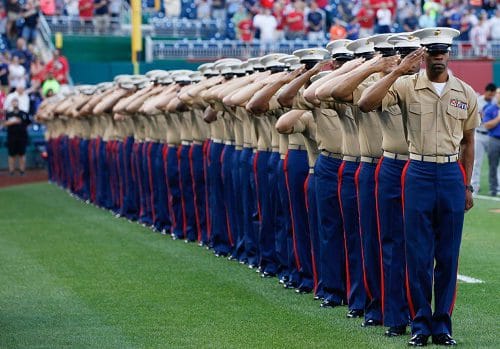 It’s been more than 200 years since Francis Scott Key penned the lyrics to “The Star-Spangled Banner”.

Since being put to music and becoming the country’s national anthem in 1931, “The Star-Spangled Banner” has been performed countless times at all kinds of events across the nation. Some of those performances we all probably wish we could forget, especially Carl Lewis, Roseanne Barr, and Fergie.

But let’s not not dwell on the negative. In honor of National Anthem Day (every March 3), we’re counting down our top 10 favorite national anthem performances.

Feel free to join in and sing along at any point…

While not technically a great singing of the anthem, it’s certainly a great, comic performance. Rudolph nails it and no national anthem list would be complete without her.

9. Josh Groban and Flea at the 2012 BCS Championship

It’s been more than half a decade since their performance, and it’s still hard to believe that Josh Groban and Flea performed together. Not to mention that they were performing the national anthem. And it was good?! Less questions. Just enjoy.

While Hendrix may have the go-to “anti-anthem” performance, Feliciano’s came first. An acoustic version may not seem so strange now, but Feliciano’s performance was highly controversial and even lost him some radio play back in the late 60’s. Since then, things have changed and he’s even been invited back by the MLB for more anthems.

There may not be more versatile voice than Lady Gaga’s. Whether she’s singing dance-floor pop or coming of age ballads or duets with Bradley Cooper or even the national anthem, she always seems to make it iconic. This performance was no exception.

Just months before becoming the center of political turmoil for their critiques of George W. Bush and the Iraq War, the Dixie Chicks delivered one of the most beautiful renditions of “The Star-Spangled Banner” we may ever hear. To this day, their red, white, and blue harmonies are still unmatched.

With a nickname like ‘The Prince of Soul’ of course Marvin Gaye was going to do something special for the 1983 NBA All-Star Game’s national anthem. However, few expected a version so smooth, soulful, and flat out great. Gaye’s performance gave new life to an old, old, tune. Has anyone else ever gotten the crowd to clap along to “The Star-Spangled Banner”?

Performed maybe with less reverence than many of the others on this list, Hendrix’s anthem rendition certainly didn’t lack passion. Or patriotism, for that matter. On a rainy day at Woodstock during the height of the Vietnam War, Hendrix’s self-reflective cry for America pitted the ideals represented in the anthem against the tragic realities of the time.

Often, when we are faced with tragedy, we find our greatest strength. In the days after the gruesome Boston Marathon bombings in 2013, the people of Boston showed just how strong and resilient they were. Hearing them sing the anthem is a perfect illustration of it all.

Hudson’s performance is powerful and triumphant. Coming just months after a horrible personal tragedy, it’s hard not to get chills listening to her rendition.

There’s a good chance you already guessed this would be at the top of our list. Either way, enjoy what is undoubtedly the greatest performance of our national anthem by none other than Whitney Houston. Just 10 days after the United States had officially entered into the Gulf War, Houston gave the country the patriotic adrenaline shot it needed. And don’t you dare tell us she lip-synced it.

God Bless America. Land of the Free and Home of the Brave.

MilFam Travel: 10 Things to Do Near San Antonio

MilFam Travel: 10 Things to Do Near Salt Lake City

MilFam Travel: 10 Things to Do Near Fort Campbell

20 Spooky Songs to Groove to This Halloween

Apex Music Festival Is Back!