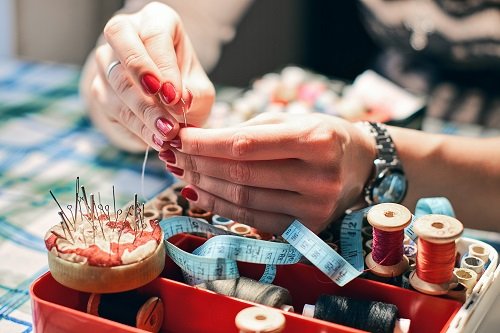 The Corps Comforts of Homemaking

I graduated from high school in Peoria, IL, and a year later I enlisted in the Marine Corps. What a change for a young woman from the Midwest!

That time was so special, as I learned I had value and could do things I never dreamed of doing. I was stationed at MCRD, San Diego, and worked in an office as a clerk and then got a job as the Administrative Secretary for the Commanding General of the base. Best of all, I met a Drill Instructor and on our third date he asked me to marry him. We met the end of September and married the first of April, 1967. (No, he never said “April Fool’s”.) Within a few months, I was expecting our first child. My mom, instead of a shower gift, sent me some material and a pattern for a maternity top.

That’s when I started sewing. I did not learn how to sew in school, instead I learned the basics watching my mother as she made a lot of our clothes, especially holiday clothes. They were so special and it was a blessing to wear new dresses.

So it started — we found a used machine at a thrift store and I began using it and found God had given me a gift. At first, most of my sewing was making clothes for our three children and my husband. I am sure they didn’t always appreciate some of the matching clothes, but they wore them. I even made a suit for my husband and, in the ‘70s, a leisure suit of double knit Styles!

Life with Larry & the Corps

Much of my sewing was while we were stationed in Okinawa where I could find inexpensive material. When we came back to the States and lived in several more states, I kept on sewing. In 1982, Larry retired from the Corps and we settled in Kansas. I worked at a bank for a year then got a position as school secretary in a private Christian school and there was a dress code. Our kids were tall and clothes from stores did not meet the code, so the sewing machine was used a lot.

After the kids graduated, I left the school to open my own business and it took a while, but it did take off. I really appreciated being able to work from home and be flexible with my hours. Larry worked 19 years at the post office and then developed lung cancer. After surgery and chemo he was free of the disease for 10 years, before it came back. Unfortunately, after chemo he developed Parkinson’s Disease. It took us about three years to realize it and start treatment. Both the cancer and PD were a direct result of his 21 years in the Corps and two tours to Viet Nam and Agent Orange. But there I was at home, working a job I loved and being able to care for my man.

Even before he died, I wanted to give my family something they could remember him by. He was such a giving man who couldn’t say no to anyone. The Christmas before he died, I made the first pillows out of his T-shirts for our grandsons living in Virginia. This past Christmas, I made pillows for the rest of our grandkids out of T-shirts and button-downs. Then I found a pattern for making aprons from Larry’s old shirts and three married grandkidss and our two daughters received those.

I tell you, it was such a blessing to share my husband with my family. As I sewed each project, I would think of him and how much he would have approved to be able to give those who he loved something that he had. Some of the shirts had stains and that made them even more special as they came from him.

My daughter Charlene had an idea about making these kids of items for others and how great that would be to help others share things their loved ones wore in ways that would honor them and help them to be remembered.

So now it’s your turn. Gather up some old meaningful shirts and get to sewing! If you have any tips to share, please comment below or Tell Your Story.

One Good Reason (of Many) You Should Be an AAFMAA Member

PCSing This Summer? These Relocation Tips Will Help!

What Kind of Life Insurance Does Your Military Family Really Need?