With help from the RAND Corporation, the Army is conducting a survey that will collect feedback directly from Soldiers’ spouses.

In a follow-up to last year’s “Today’s Soldier: Assessing the Needs of Soldiers and their Families” survey, “Today’s Army Spouse” is particularly interested in what families think about all of the support and services the Army has to offer. What programs are working? Which ones are lacking? And which ones aren’t doing anything? The Army wants to hear from you — Army Spouses — about the challenges you face every day so that they can ensure you’re ready. Essentially, the Army wants to know how they can make your life easier. Who can argue with that?!

According to the survey website, “The Today’s Army Spouse Survey is the only systematic Army survey that collects feedback directly from spouses of Soldiers about your needs, and about the strengths and gaps in the services available to you.” Now’s the time to share all of those big ideas—and big complaints—you’ve been keeping to yourself. 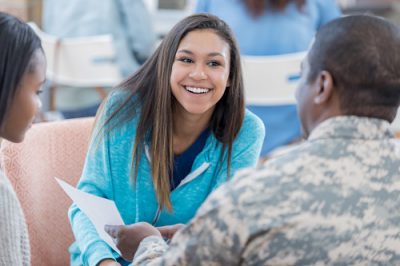 “Today’s Army Spouse” is just the latest example of ongoing efforts by both the Army and the Pentagon to better understand the needs of military families. Officials use the input and responses from surveys like “Today’s Soldier”, “Today’s Army Spouse”, and others, to gauge how well they are supporting military families. So even though surveys aren’t always the most exciting way to spend your time, it’s in your best interest to respond whenever you can! Your responses have a significant effect on how Army leaders assess and resolve community issues.

In order to qualify for this survey, participants need to be married to a Soldier, but not be a Soldier, themselves. Postcards with survey access codes will be arriving in the mail before the end of February for spouses who were selected. So keep an eye out and make your voice heard!

Looking for a Flexible Career? Here You Go.

4 Ways to Empower a MilSpouse Career