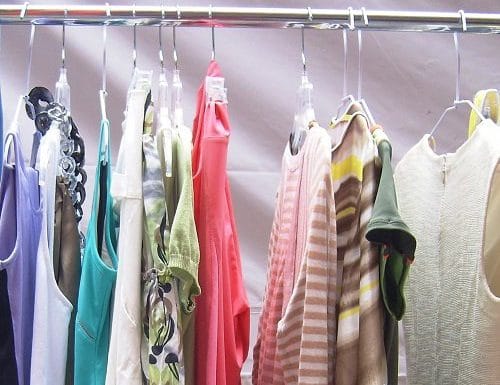 If you’ve fallen out of love with some of the items that make up your daily wardrobe, it may be time for a swap! That’s what MilSpouses in Stuttgart, Germany, recently did with SpouseLink Ambassador Jessica in attendance, sharing news about SpouseLink along with some fun giveaways. What did they think of the event? Hear how things went in Jessica’s own words:

“Yesterday’s Clothing Swap event was truly a blast! About 20-25 women… left with some nice goodies in hand. The two hostesses — Annette and Melinda — spent the last two months collecting gently used clothing, shoes, and accessories from MilSpouses who no longer wanted them. Melinda transformed the bottom level of her home into an adorable little “boutique” displaying all of the collected items.

“Everyone put their names into a bowl and the hostesses drew five names at a time. Those five names were given eight minutes to look through the clothing and choose five pieces. After the eight minutes were up, another five names were drawn. After everyone had a chance to go, the “boutique” was opened up and everyone could take as many items as they’d like. The rest were donated to a local shelter. The participants were also asked to donate $5 (shown in the Marine Corps cap by the SpouseLink items) which will be given to the USO.

“The women LOVED the free SpouseLink goodies and wine! Several of them had already heard about SpouseLink as word is quickly spreading about this ‘new girl who generously goes to fun events and has giveaways’. [<<It’s Jessica!] … I did a drawing for one of our totes along with a bottle of wine and some chocolates.”

Jessica also had the chance to tell the group about how great SpouseLink is. One of the many reasons we love her.

What was trending? Get the look:

MilFam Travel: 10 Things to Do Near Jacksonville, FL