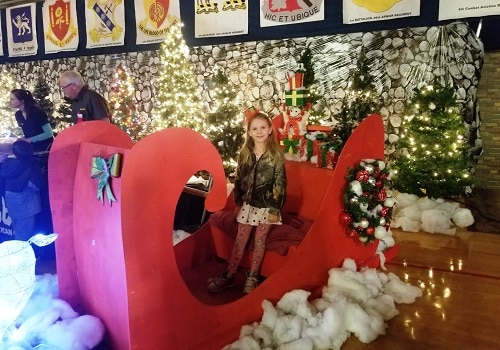 When it comes to our Ambassadors, we don’t mind extending the holiday season long into January. They always have so much going on, and Ambassador Angel has had her fair share! In Colorado Springs, she hosted and participated in several events throughout the fall and winter of 2018 on behalf of SpouseLink and AAFMAA. And with that in mind, we’ve gathered up the details and photos from just a few of those events to share with you. Such as…

On November 10, Angel participated in the Veteran’s Day Event in Denver, which was hosted by The Colorado Veterans Project. She said it “was a really great event with vendors that were all about helping veterans and their families. There was live music, a parade, food, and lots of people.”

A few days later, on November 15, she attended a Military Spouse get-together with about 20 spouses and their kids. Angel noted that “each spouse brought a small dish to share with the group.” And Angel invited MilSpouse Mrs. Ivory to speak about her time as a military spouse and how moving into the next segment (her spouse is retiring) of her life has changed things. She is also writing a book about military life, which she hopes be out next year.

In December, Angel was on the scene of the the big event: The December 6 Tree Lighting Ceremony, held at the Event Center on Fort Carson, hosted by the MWR. Angel included a prize wheel at her table so attendees could spin for a chance to win a prize. She gave away one “big” prize and a few other smaller prizes… including festive glow sticks… which brought families to her table multiple times. Not to mention, the Army band was there, and families got to enjoy taking pictures with Santa, making cartoon character drawings, eating holiday cookies, and more. A great turnout!

But what does the magic of Christmas inspire? Sharing the love of family and friends! And that’s what another one of Angel’s events was like on December 14. It included 9 families that had a spouse deployed and/or who needed a little help with Christmas. Angel gathered donated toys, had a few small Christmas crafts, finger foods, and Christmas music. She also had a retired military family volunteer to host this small event in their home, which made it a warm, homey event.

A couple other events were sprinkled within the season, and Angel was proud to represent SpouseLink at each and every one of them. We’re glad she was there, too!

See all the fun for yourself!

SpouseLink on Location: Breakfast with Santa in Norfolk, VA