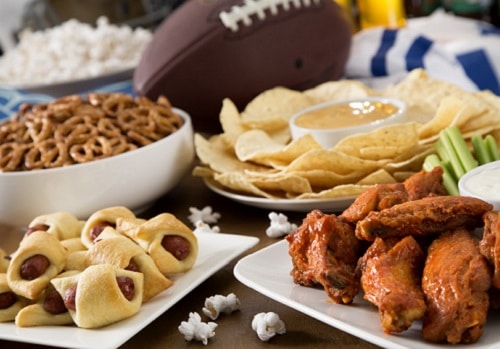 A lot of people dread the holiday wasteland that arrives after New Year’s Day. With Halloween, Thanksgiving, Hanukkah, Christmas, and New Year’s all stacking up in just two months, the holiday comedown can be tough.

But aside from being loveless (hello, Valentine’s Day), anyone that welcomes the new year with a multi-month countdown until the next holiday is forgetting one of America’s favorites.

Next weekend, we’ll all gather around the TV for what can only be described as a national holiday in America. And whether it’s the first and only game you’ll watch this season, or the 101st, we’re all football fans during the Big Game.

This year’s championship features the New England Patriots vs. the Los Angeles Rams. And while we might not all agree on who to root for, we can all agree that the main attraction next Sunday isn’t necessarily the game. Or the halftime show. Or even the commercials. Real fans know it’s all about the food.

Second only to maybe Thanksgiving, the “tailgate” and potlucks for the Big Game are a beautiful American expression of gluttony and camaraderie bordering on religious ritual. Leave the Fitbit at home. This is not the night for counting calories.

And whether you’re hosting the whole gang or just contributing to the potluck, we’ve got you covered with recipes for a big night of big eating. There’s a little something for everybody…

The almighty french fry is still largely unbeaten as a sports snack/side item. Keep ’em simple or dress ’em up. The choice is yours and you really can’t go wrong.

There’s nothing wrong with wings, nachos, sliders, and other game-day classics. Sometimes, it’s best not to overthink things and stick with the staples.

Bacon, burgers, and football. Need we go on?

Just because the game’s being played in America doesn’t mean the spread can’t be from overseas. Add an international flair with a dish from just south of the border.

You know what they say. A party is only as good as it’s desserts. They say that…right?

6 Delicious Ways to Shake Up Your Vanilla Milkshake

So dessert’s not your thing? No problem. Neither is meat? Not problem there, either. Whether vegetarian or vegan, there are still delicious game day options for you.

And don’t forget the refreshments!

After you’re done chowing down (or during the feast whichever you prefer), look out for some of our nation’s finest servicemembers on the sidelines.

Carolina Panthers RB Christian McCaffrey has already ensured our Veterans will be represented at the game. And the Patriots are taking care of Massachusetts Military Support Foundations CEO Don Cox with a pair of tickets.

But our military will be represented throughout the game so keep your eyes out for the men and women in uniform, and we aren’t talking about helmets and shoulder pads.

Add Even More to Your Buffet Table: