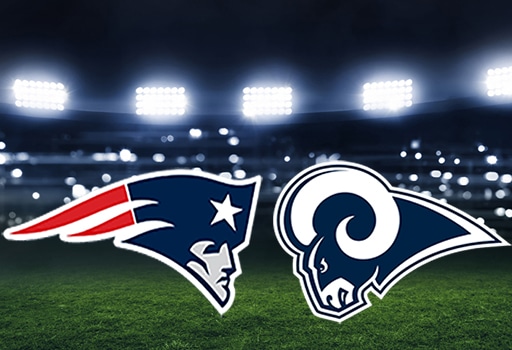 It’s been a loooong season. Whether you’ve been religiously glued to your TV every Sunday or couldn’t care less about touchdowns and interceptions, chances are you’ll probably be some where near a TV come kickoff. Besides, even if the game doesn’t deliver, the commercials or halftime show will. So here we go. Championship Sunday. The Mercedes-Benz Stadium, Atlanta, Georgia. New England Patriots vs. Los Angeles Rams. This one’s for all the marbles.

Like a broken record, the New England Patriots are back in the championship game representing the AFC. You may be thinking, “Hey, weren’t they in it last year?” Yes, they were. “And the year before that?” Yes, then, too. Since 2001, the Patriots have been AFC champions 8 times! This year, Tom Brady is going for his sixth NFL championship ring. That would mean Brady has won the Big Game more times than any other quarterback in history has even played in it.

Any way you look at it, the Tom Brady and Bill Belichick duo has been dominating for close to two decades. Could this be the end of their long and historic run? It’s pretty hard to bet against a team that’s had such overwhelming success for so long. Especially when they’ve been able to whether the storm so well.

This season seemed like the it might be the beginning of the end for New England. Injuries both small and large nagged at key players throughout the year. Promising rookie running back Sony Michel missed a few games, as did back-up, hard-nosed running back Rex Burkhead. Rob Gronkowski‘s Frankenstein-physique suffered another minor setback this season. Josh Gordon, the hopeful savior for a struggling passing attack, had to leave the team for personal reasons. And powerful conference foes like the Kansas City Chiefs and Los Angeles Chargers looked poised to knock the kings off their throne.

Yet, through it all, the Patriots found an answer. Whether it’s with do-it-all back James White, or former lacrosse player Chris Hogan, the Patriots simply get it done. Now, they are in the championship once again after an impressive 11-5 season. In 2019, no one really ever counts this monstrosity of winning as an underdog. But they seem to think of themselves as such. Does anything else even matter?

Tom Brady with the mic drop at the #Patriots send off rally. 👏🔥

Unlike the perennial playoff favorite Patriots, the Los Angeles Rams find themselves in the championship game for the first time since 2001 when they played… you guessed it… Tom Brady, Bill Belichick, and the New England Patriots. It will be their first championship game since returning to Los Angeles in 2016.

Although not championship mainstays like their counterparts, the Rams’ success this year hasn’t exactly been a surprise. One of the worst teams in the NFL just two seasons ago, coach Sean McVay has quickly turned things around. After some surprise success last season, the Rams went out and bolstered their lineup to make sure they weren’t one year wonders. They added defensive studs like Ndamukong Suh, Aqib Talib (former New England Patriot), and Marcus Peters to join the freaky good Aaron Donald. Before the season even started, many were predicting them to win the NFC. And throughout the season, they didn’t disappoint.

LA finished the season 13-3, their best record since 1999. While they added stars to their defense this season, offense is where they really shine. The Rams were 1st in total offense, 2nd in scoring offense and 3rd in rushing offense behind the elite performance of their MVP-caliber running back, Todd Gurley. Although Gurley has been slowed by injury throughout the playoffs, he’ll need to step up big on Sunday if the Rams have any chance of taking home the Lombardi trophy.

Their passing attack was no slouch, either. Third-year quarterback Jared Goff continued to excel this season under coach McVay, posting top 10 ranks in both passing yards and passing touchdowns per game. He’ll need to keep it up to keep pace with the great Tom Brady this Sunday. To make it even more difficult, he’ll have to do so without standout slot WR Cooper Kupp. Can Brandin Cooks (former New England Patriot) and Robert Woods carry the load? We’ll see…

Who will you be rooting for this Sunday? Will Brady add to his legacy and bounce back after last year’s championship game defeat? Or will the upstart Rams get revenge for their heartbreaking loss nearly two decades ago? We’ll have to wait and see.