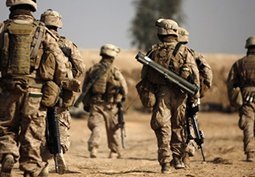 The spending plan to begin Oct. 1 would give troops and civilian employees a 1.3 percent raise, slightly more than the 1 percent bump they received the past two years. The increase is well below the 2.3 percent estimated increase in private-sector wage growth, which it’s supposed to match by law.

The budget also includes previously proposed efforts to reduce personnel costs in part by having troops pay for a small share of their housing costs, having families rely on a more simplified Tricare program for their health care, and having retirees pay slightly higher medical fees and co-pays.

“Given the long-term fiscal realities faced within defense budget funding levels, the Department must continue to explore proposals that promote slower growth in pay and benefits costs,” an overview document states.

Click here to read the full article that discusses changes to benefits, the shrinking military, war budget, and changes to weapons and equipment funding.