Turn your device to portrait mode. Just trust me on this one. 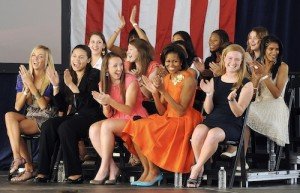 First Lady Michelle Obama reacts to the announcement that the military dependant teens in the audience would be getting gift certificates from JCPenney during her visit to Naval Air Station Jacksonville, Fla. Thursday, April 12, 2012. Mrs. Obama visited Naval Air Station Jacksonville as part of the one-year anniversary of her “joining forces” program, which aims to help veterans and their families. (AP Photo/The Florida Times-Union, Bob Self)

This article was posted in . Bookmark the permalink. Follow comments with the RSS feed for this post.Post a Comment or leave a trackback: Trackback URL.