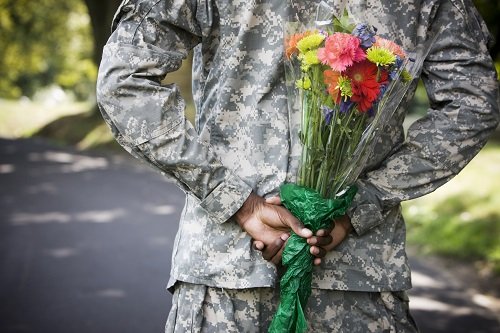 There are incredible perks about being a dual-military couple. The most obvious of which is you have a partner who truly understands what you do every day. On the flip side, it can also be very stressful as you both maintain the same obligations to the military that often can leave you apart for double the time that military/civilian marriages have to deal with. One deploys and upon her return it’s the other spouse’s turn. The following three points are things my husband and I have learned over our seven years of marriage as a dual-military couple in the US Army.

Point #1: Prioritize being together over individual goals

My husband, Sean, and I met at West Point. He was a year ahead of me and because you cannot be married as a cadet, we had to wait until I graduated. It became very clear from the beginning that the road we chose by being together was not going to be easy. The Army has what is called the Married Army Couples Program (MACP), in which married service members can enroll in order to ensure, to the best of the Army’s ability, that they will receive the same duty station. However, Sean commissioned a year ahead of me with a follow-on assignment at Fort Hood and we were not eligible to enroll in MACP because…well…we weren’t married. And we couldn’t get married until my graduation. So we just had to hope that I could get Fort Hood.

Unfortunately when it was my turn to post almost a year later, the last two slots for Fort Hood were sucked up by another dual-military cadet couple with plans on marriage immediately after graduation. I was immediately after them on the order of merit list. So when my name was called I picked Fort Bliss because it was the closest to Fort Hood of all the other options. I was crushed. I’d get married to Sean and then be apart from him for 2-3 years. Not a good way to start a marriage. And I’d be at Fort Bliss! The Army’s most miserable duty station from what I’d been told.

Sean and I got to work fixing this fast. We both got with our branch managers and explained the situation. After several very stressful weeks, we finally were able to get Sean’s orders changed to Fort Bliss. And guess what? Fort Bliss was amazing and remains our favorite duty station to this day. It’s actually the duty station that inspired me to start my own website.

I realize not every story ends like this, but more often than not, I see dual-military couples giving up too easily or prioritizing individual goals and desires over being together. For example, one gets orders to Germany and the other to Fort Polk and the former is unwilling to sacrifice location for family time. They make the argument that “it’s only temporary” and that the spouse at Fort Polk is basically taking a vacation every time they visit in Germany. This, my friends, is a recipe for disaster. Before you know it, you’ll have lived apart for three years and won’t be able to face the joys and challenges of marriage together. Not to mention you’ll have to re-learn how to live with someone when you finally reunite; a process that causes heartache for honeymooners, let alone seasoned spouses. If you want my advice, do whatever it takes to be stationed together, no matter the location and no matter the job. When you’re done with the Army, you want your family to still be with you.

Point #2: Have the “kids” talk early and often

Starting a family and being dual-military is very very difficult. My husband and I haven’t grown ours yet solely because we are both active duty. I have many friends who’ve been successful in having kids while both are in service, but each one will admit that it was harder than they anticipated. Imagine both of you having to deploy and hoping that your parents are ok with raising a toddler, or heaven-forbid a hormonal teenager, for a year. Before you decide to have kids, ask yourselves the following questions:

The above questions and ensuing discussion is not a one-time deal. Have the conversation before you get married and several times throughout marriage prior to having kids. I guarantee you the answers to these questions will change frequently depending on your current assignment and familial relationships.

Point #3: In a competition, you both lose

Chances are if you’re a dual-military couple then you’re both used to “wearing the pants” while at work. When you get home, it can often be a struggle to balance who is in charge or who does what. The following is what works for us, and has taken almost 7 years to fin-tune. It did not come easy.

When we come home, I’d like to think of it more as my husband and I traded in the pants for skorts. You know, those skirts with shorts built in. Both stylish and practical. On the weekends, we divvy up household chores based on what we prefer to do. He prefers to grocery shop and fold laundry. I prefer to clean the house and start the laundry. We also split up who takes care of the dog and cat, and we both take turns cooking.  Whoever doesn’t’ cook washes the dishes while the other “relaxes” and dries. Additionally, during the work week, we have a strict policy of whoever gets home first starts cooking dinner. The other makes lunches for the following day and takes care of the animals.

I give the above example in order to highlight that it should never be a competition of who does more in order to make the other person feel like they aren’t pulling their weight. “Well I do X and Y and you only do Z, so this isn’t fair.” This clearly indicates that you are keeping a tally of who has it worse and quite frankly, it’s annoying. Sit down together and make a list of the tasks that have to be completed as a couple and just do the things that you’re better at. On the tasks that overlap (as in, you’re both bad at them, or both hate them) then split them up.

Learn more about common military marriage issues including the truth about infidelity in the military on SpouseLink.

Riley Kennedy is a US Army Captain and the Founder of Right and Up; a blog about the best things in every military town. She has been stationed at Fort Bliss, Fort Huachuca, Fort Riley and now at Fort Benning. You can connect with her on Facebook, Instagram and Twitter.