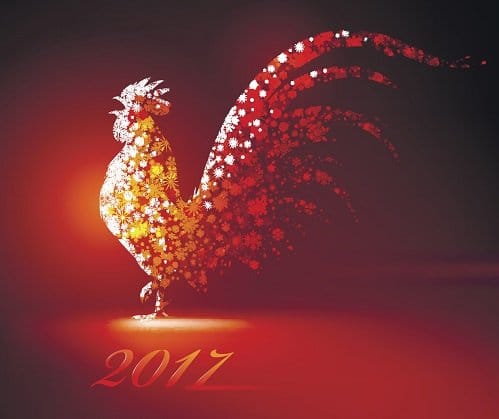 Welcome to Chinese Lunar New Year 2017, known as the year of the “Fire Rooster”! What’s it all about and what could it mean to you and your military family? We’ve got a few details for you to consider. Let’s get started…

About the Chinese Zodiac

The first thing to know about the Year of the Fire Rooster is that it’s part of a 12-year Chinese zodiac calendar that assigns 12 different animals to each year: Rat, Ox, Tiger, Rabbit, Dragon, Snake, Horse, Goat, Monkey, Rooster, Dog, and Pig.

Chinese astrology further divides its 12 zodiac animals into five elements: Wood, Fire, Earth, Gold, Water. So, when you match up a Chinese zodiac animal with an element, you get a general personality type — not only for people born during that lunar cycle, but also the personality of the year that is represented by that combination.

In 2017, the element + character combination is a Fire Rooster.

The U.S. Military & the Chinese Zodiac

Here are a few interesting facts for you about the formation of our military:

In a nutshell, here is what you can expect from the various element + Rooster combinations, according to ChinaHighlights.com:

Wood Rooster
Born in 1945 or 2005
Energetic, overconfident, tender, and unstable

Fire Rooster
Born in 1957 or 2017
Trustworthy, with a strong sense of timekeeping and responsibility at work

Earth Rooster
Born in 1909 or 1969
Lovely, generous, trustworthy, and popular with their friends

Gold Rooster
Born in 1921 or 1981
Determined, brave, perseverant, and hardworking

Water Rooster
Born in 1933 or 1993
Smart, quick-witted, tenderhearted, and compassionate

What’s the first thing you think about when you think of roosters? Crowing, perhaps? Up at the crack of dawn? Never keeping quiet? Always keeping busy? Strutting their stuff? Hmm…. Well, you’re right. That’s a pretty good indication of what Rooster people (and years) are like.

You can get a taste of their personalities by watching the performances of these musicians, born in either 1957, 1969 or 1981: Marc Almond, Daniel Ash, Billy Bragg, Beyonce,  Josh Groban, Jennifer Hudson, Loreena McKennitt, Britney Spears, Gwen Stefani, and Dweezil Zappa.

(You are forewarned: Some images and language may not be appropriate for all audiences.)

You will notice that some of their personalities seem gentle and kind, while others are more showy and unabashed. Of course, all of that could be a stage personality; you never know what someone is really like in their private life, but… it does highlight the difference that elements can make to creating the Rooster personality in the Chinese zodiac.

The commonality between all of the Rooster personalities seems to be a desire and ability to reliably effect change, and/or to inspire others to do so.

If you were born in a Rooster year, it may not be your best year ever (in fact, it may be downright unlucky for you!), but that goes for Monkeys who just experienced 2016, the most recent Monkey year, and for those born in the same sign as the next animal year, and so on.

What does “unlucky” mean? Well, it could be as simple as things being just that much harder to accomplish this year than you’d like. Maybe your budget will fall a little short. Maybe you’ll miss out on an opportunity you were looking forward to. Maybe you’ll experience a few health issues now and then.

But there are also a number of good things to look forward to for all of us, whether or not we were born as a Rooster. For instance, the relationships we have with others will be strong and help us get through any unforeseen difficult times. We can expect our days to be active, engaging, entertaining, straightforward, non-stop….

This Rooster year will support our ability to:

But we should be careful not to come across as:

Here is a month-by-month breakdown (from TravelChinaGuide.com) of how work, wealth, love and health may be for Roosters in 2017.

A few things for ALL signs (not just Roosters) to look forward to:

Doesn’t sound so bad now, does it?

What are you looking forward to in 2017? Share your story by commenting below, or tell us your story.