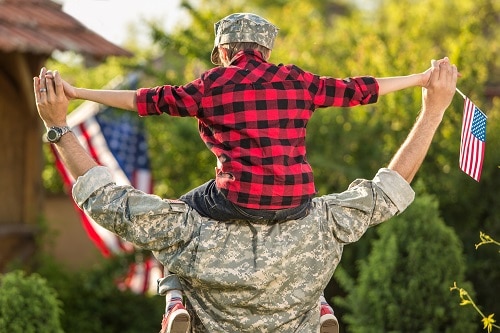 Celebrating the Month of the Military Child

There are currently 1.2 million military children of active duty members worldwide and they all share a unique bond. They’re all “military brats”. And we don’t mean brat as in misbehaved. Military.com describes the nickname as a “badge of pride worn by generations of kids who traveled the world with their parents, moving into adulthood with the knowledge that they have the strength to handle anything.” “Brat” is more than just a nickname; it’s an identity. Former U.S. Senator Ben Nelson may have described it best when he wrote “when the word ‘brat’ is used to describe someone it is not meant as a compliment, but when it is preceded by another word and becomes ‘military brat’ it becomes a term of endearment.”

The unconventional lifestyle of a military brat can be tough, but their strength and resiliency through it all is truly remarkable. On average, the military family moves three times more often than their civilian counterparts. As a result, “home” often means something very different for military brats. That’s why the Biden Foundation has asked Military children to get creative and send in their pictures of home this month for their “Picturing Home” project.

“Our ultimate goal of Picturing Home is to celebrate our military and civilian children and raise awareness about military children in their communities. We know the majority of military kids do not live on-base, so it is important to us that their communities know about them and learn how to best support them,” says the Biden Foundation.

Check out the following video from DoDEA about Month of the Military Child and remember to thank a military brat for their service, too.

What does being a military brat mean to you? Let us know in the comments. Or share your story with us!

More on Military Children from SpouseLink:

April is the Month of the Military Child