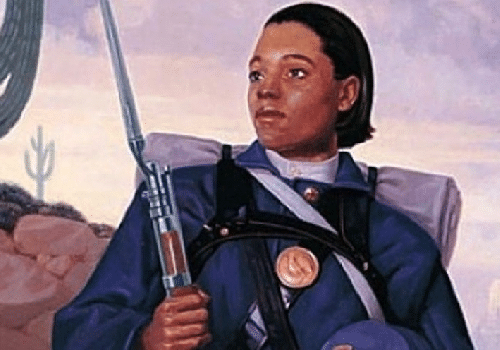 Today, the U.S. Military is represented by a number of different races, nationalities, creeds, and cultures. But our Military did not always accurately reflect our country’s rich diversity. For years, African Americans faced numerous roadblocks that hindered their entry into the United States Military. On top of the discrimination and racism they faced — from servicemembers and civilians — African Americans were legally barred from enlisting, kept apart from other white servicemembers, and denied entry into combat.

Racial discrimination within the United States Armed Forces was not officially abolished until President Harry S Truman’s Executive Order 9981. Segregation among servicemembers did not end until decades later.

As we near the end of Black History Month, let’s look back at some of the groundbreaking achievements from a few of America’s greatest black servicemembers.

Considered by many to be the Father of Black Nationalism, Martin Delany studied medicine and later teamed up with famed abolitionist Frederick Douglass to publish the North Star, an anti-slavery newspaper that began publication in 1847. When the Civil War began, Delany helped recruit men to join the Union Army and pled with President Abraham Lincoln to allow black officers to lead all-black corps during the war. Delany’s request was eventually granted, and he was named Major in the 52nd Colored Troop regiment, making him the first black line officer in U.S. Army history.

In 1877, Henry O. Flipper, a former slave, became the first African American to graduate from West Point. Flipper would go on to become the first non-white officer to lead the famed Buffalo Soldiers of the 10th Cavalry. Unfortunately, Flipper was court-martialed and dismissed from the U.S. Army amidst rumors of various improprieties.

A slave who is alleged to have escaped to freedom via the Underground Railroad, William Carney served as a Union soldier in the American Civil War. Carney would earn a Medal of Honor in 1900 for his brave actions during the Battle of Fort Wagner in 1863. Because his service happened before those of other Medal recipients, Carney is credited as the first African American soldier to be awarded the Medal of Honor.

Known most famously for his career as a Heavyweight boxer, Louis eventually joined the United States’ fight in World War II after Japan’s attack on Pearl Harbor. Louis even donated two fight purses (totaling nearly $100,000) to the war relief effort before he officially enlisted. As a member of the service, Louis pushed to allow African American soldiers into Officer Candidate School, ultimately opening the door for another famed athlete-soldier, Jackie Robinson. Louis was awarded the Legion of Merit for his service during WWII.

During his well decorated Military career, this retired four-star general served as National Security Advisor and Commander in the U.S. Army Forces Command before serving as Chairman of the Joint Chiefs of Staff during the Persian Gulf War. Powell is the first and only African American ever to serve on the Joint Chiefs of Staff. Under President George W. Bush, Powell would serve as the 65th U.S. Secretary of State from 2001 to 2005. Powell was also the first African American to hold that position.

These brave men and women, along with many many more, helped paved the way for a much more inclusive fighting force. Although instances of racism still exist among the ranks, we have certainly come a long way. However, there is still work to be done.

Is there a hero we forgot to mention? Or do you have a story of your own you would like to share? Let us know in the comments or share your story!