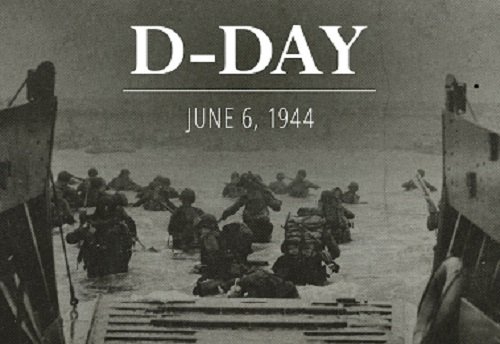 “The eyes of the world are upon you. The hopes and prayers of liberty-loving people everywhere march with you.”

Those were some of the final words Dwight D. Eisenhower spoke to U.S. troops before they set out to storm the beaches of Normandy 74 years ago. At the time, D-Day was the biggest seaborne invasion in military history and proved to be an enormous success for the Allied forces in World War II. Around 150,000 troops from America, Britain, Canada and other Allied countries descended on the French beaches, driving back Nazi forces and securing the first major victory towards liberating France from Nazi control. The Allies’ victory on D-Day would prove to be a turning point in the war, vital to their ultimate victory on the Western Front. For Hitler and the Nazis, D-Day was the beginning of the end.

In the 74 years since the battle on France’s northwestern shore, D-Day has been featured in countless movies. There’s no way anybody could ever watch them all! Luckily, we’ve selected some of the best ones out there so that you only have to watch the good stuff.

Set during the Invasion of Normandy, Saving Private Ryan tells the story of United States Army Rangers Captain John H. Miller (played by Tom Hanks) as he and his squad search for Private First Class James Francis Ryan (played by Matt Damon). Private Ryan is one of four brothers fighting in World War II, and the last one still alive. The film is renowned for it’s intense and and graphic portrayal of war. It is definitely not meant for younger viewers.

Based on Cornelius Ryan’s book by the same title, The Longest Day is one of the most comprehensive looks at the D-Day invasion. The three-hour epic depicts the invasion from the perspective of Allied and German forces in a quasi-documentary style. While the film boasted a star-studded cast, including John Wayne, Sean Connery, Henry Fonda, and many more, the film also included actors who had actually been a part of the D-Day invasion. Additionally, the film employed military consultants from bot the Allied and Axis sides to ensure they accurately captured the sentiments of war.

3. The Americanization of Emily

Based on a novel by William Bradford Huie (a SeaBee officer on D-Day), The Americanization of Emily is a break from the violent and gory depictions of war. Instead, this film follows an American naval officer (played by James Garner) in the weeks leading up to D-Day as he falls in love with an Englishwoman, Emily (played by Julie Andrews), who has already lost her husband, father, and brother in WWII.

Instead of focusing on the actual D-Day battle, IKE Countdown to D-Day looks at the tense times before the invasion. Focusing mainly on the 90 days before the attack, this film gives a dramatic, behind the scenes portrayal of the D-Day decision makers — most notably Dwight Eisenhower (played by Tom Selleck) — and the intense pressure they were all under as they prepared for the most important military maneuver of the war.

Based on Stephen Ambrose’s book by the same name, this made-for-HBO miniseries tells the story of the “Easy” Company, 506th Regiment, 101st Airborne Division, U.S. Army. Using interviews with survivors of the Easy Company, as well as journal entries and letters sent during the War, Band of Brothers chronicles the extraordinary journey of these brave young men as they face even more extraordinary challenges. Band of Brothers, better than maybe any other World War II depiction, portrays the human emotion still present in War as you truly get to know and love some of the members of the Easy Company.

Know another memorable D-Day or World War II movie that you didn’t see on the list? Let us know in the comments, or write your own story!

10 Father’s Day Activities to Enjoy with Your Military Dad