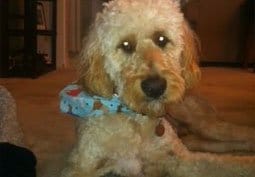 I didn’t know we needed a dog so desperately until we got Murphy. Oh, I knew something was missing—we weren’t quite “complete” and another kid was out of the question. Neither Rob nor I are cat people (we’re both allergic) and other types of animals just didn’t appeal to us. So a dog it was.

I had been working on Rob for a dog for several years but he stubbornly resisted, claiming we had enough on our plates and, later, asking me to wait until we moved into an actual house with a fenced-in yard. Reluctantly I agreed.

As it turned out, our house and yard here are ideal for a dog and my husband was all out of reasons. So several months after moving in (when the roof-high stack of boxes on our patio had finally dwindled.  Not exaggerating in the slightest,) we started searching. I chose the Golden Doodle breed because when I was a child, my family had a series of standard poodles which are simply wonderful animals. But I wanted to try something a little different.

Through friends, I heard the mixed breed of Poodle and Golden Retriever made for an intelligent and loving animal. After pinpointing a breeder online, we trekked to Georgetown one Sunday to meet our future beloved pet. There were about eight puppies in this litter, each unbearably cute in its own way. Our younger son Andrew—age 6 at the time—immediately bonded with a brownish fluff ball temporarily named “Yellow Boy.”  (The breeder and her family had gotten too attached to previous litters so this time decided to only refer to them by color and gender). However Ryan, the eldest, was drawn to “Purple Girl.” We had a serious dilemma on our hands. Luckily, the puppies weren’t old enough to leave their mother quite yet so we had some time.

When at last it was decision time, I flipped a coin and “Purple Girl” won.  Inexplicably, I yelled “best two out of three” and continued flipping until “Yellow Boy” was the clear victor.  Son #1 huffed and puffed but he soon recovered.

In retrospect, I believe that happened because “Yellow Boy,” now “Murphy” was “our” dog from the very beginning. He belongs with us like fire ants belong here in Central Texas.

His quirks seem tailor-made for the Dillons. Quite simply, he is as weird as we are and as contradictory. One the one hand, he can lounge like nobody’s business and is the softest, most comfortable nap buddy a gal could ask for. He’s also vaguely neurotic and obsessive-compulsive when it comes to food and his sacred daily walk. Rob calls him “Rain Man” when he starts his restless pacing first thing in the morning, which is thinly-disguised code for “walk me now!”

We each find ourselves turning to Murphy for stress relief. The boys hug on him or throw his toys for him to fetch. After a long day of soldiering, Rob wrestles with him and then pets his silky fur until Murphy’s eyes are mere slits, while I love to chase him in the yard. All this and the dog can crack us up with his silly antics—a welcome quality when we start stressing about things we can’t control. For example, being half Retriever, he will bring “offerings” to us in the middle of the night. These can range from one of the boys’ dirty socks to my older son’s wristwatch. I’m a little embarrassed to admit that he sleeps on our bed more often than not and has long had dibs on one of the couches in the TV room. (A new couch purchased less than a year ago. Yes, this dog is spoiled.)

Whatever type of pet one chooses, he or she can ease the uncertainty and anxiety of military life for the entire family. Yes, we will move again but so will Murphy. And he will make our next house or apartment or duplex a home just by being in it. And most likely, he will “own” the couch at the new location, too.

Tell us how pets have made your military family complete at SpouseLinkEditor@aafmaa.com.

How to Make an Empowering MilSpouse Career Move

Mindful Monday: 5 Lessons We Can Learn from Our Pets