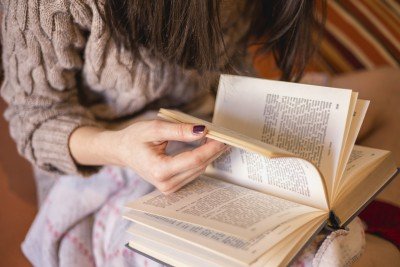 3 Books to Sink Your Heart Into

In the mood for a good romance? February is a great time to delve into one… and, of course, some of the most ideal romances are depicted in classic tales filled with mysterious, deep and regret-filled suitors. Or, perhaps, an unrequited love from one’s youth. Three stories that come to mind are Griffin and Sabine, Anne of Green Gables, and Jane Eyre. One is artsy and hands-on, another is sweet and emotional, and another is heart-wrenching and dramatic. Which one will you choose?

Griffin and Sabine — An Extraordinary Correspondence
By Nick Bantock

The first installment of a trilogy, Griffin and Sabine is an epistolary novel/art book that became a bestseller in 1991. It tells the story of two characters caught in time, held together by the letters and postcards they send to each other from around the world. As the story goes on, Griffin tells himself that Sabine doesn’t even exist. What will be your opinion? Open up the first page to hop into this unique romance told through postcards and letters that are removable from the book, making you feel as though you are peering into (or experiencing for yourself) their secret correspondence yourself.

Read the description of Griffin and Sabine on Wikipedia.

In its essence, the story reveals the life experience of a fiery, clever and romantically inclined orphan named Anne who ultimately charms the brother and sister who take her in. But it also tells the story of a romance between Anne and her friend from school, Gilbert Blythe. Used to getting the attention of the other girls at school, Gilbert is thrown off when Anne dismisses his attempts at wooing her. As time goes on, it becomes clear that all of Anne’s unique quirks are exactly what Gilbert has been missing… but will he actually ever inspire her to show him she loves him, too? You will have to read the series to find out.

Read the description of Anne of Green Gables on Wikipedia.

Was this book on your high school English class reading list? If you didn’t read it then, now may be the perfect time. It’s a love story told in moody prose as Jane shares her experiences as a governess who falls for the dashingly dark Mr. Rochester. His household has a secret Jane is not privy to, until an inopportune moment. With a vast cast of characters, the story winds itself around various moments of Jane’s life as she grows to discover what true love is… and then how to express and accept it.

Read the description of Jane Eyre on Wikipedia.

What romance novel are you in the mood for this month? Let us know by commenting below or clicking on “Tell Your Story”.

8 Ways to Celebrate Valentine’s Day with Everyone You Love