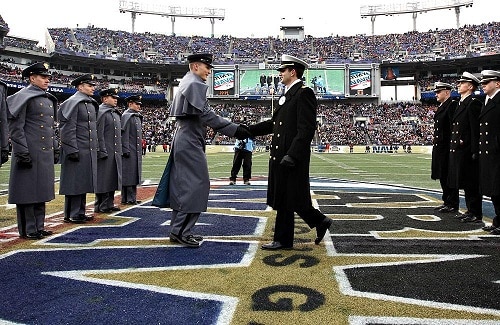 You know the saying “Save the best for last”? Well no better is that saying put into practice than during the college football regular season.

This weekend, college football’s annual curtain call will be on display as the Army Black Knights take on the Navy Midshipmen in what is arguably the biggest rivalry game in all of college football. If you haven’t done so already, mark your calendars: This Saturday. December 8.  3:30 pm. It’s going down.

As for last year’s victors, the Black Knights, well they just can’t wait to get another crack at Navy. A win this year would be three straight after breaking their own 14-year losing streak back in 2016.

Navy’s not cowering away, though. They’re counting down the day, too. They’re just hoping for revenge.

And they’ll be looking for it in style. The Naval Academy and Under Armor teamed up to deck out the Midshipmen yet again this season. You may remember the Blue Angels-themed unis from last year. Well, this year the blue is gone and the billy goat is here. Inspired by the academy’s mascot Bill the Goat, the Midshipmen will be taking the filed in all white: 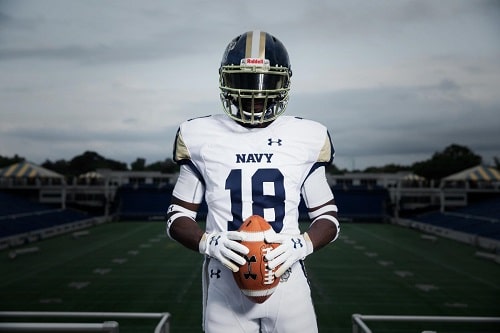 Not to be outdone, the Cadets will also be looking good… we think. After dawning all white in last year’s snowy affair to honor the 10th Mountain Division, there’ still no word on what the Cadets will be wearing this year. But this tweet has us excited for what’s to come.

1 million RT’s and we’ll open this box of @VicisPro goodies we just got for the @ArmyNavyGame 👀 🇺🇸 pic.twitter.com/Lj8ytfc85g

This year’s matchup will feature two very different teams. The Black Knights have looked great, riding a strong defense, coached by Broyles Award finalist Jay Bateman, and an overwhelming running attack featuring Darnell Woolfork. Sitting at 9-2 and second in the Independents conference to only Notre Dame, the boys from West Point have been a surprise success this season. With a win over Air Force earlier this season, Army could find itself retaining the Commander in Chief trophy if they’re able to beat Navy this weekend.

The 2018 season hasn’t been quite as kind to the boys from Annapolis. Navy currently sits at the bottom of the AAC conference’s American West division with Tulsa. Both are just 2-6 on the season. After 6 straight winning seasons under Ken Niumatalolo and 6 straight bowl games, Navy will finish this season with their first losing record since 2011, and their worst since going 2-10 in 2002. They could salvage something with the sweet taste of revenge this Saturday, though.

This weekend’s game will mark the 119th meeting between these two service academies. Navy currently leads the all-time series 60- 51-7. You can watch the game on CBS.

What Are You Eating During the Big Game?