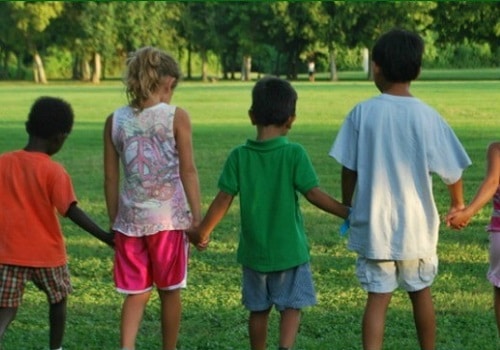 By Maria Mora
She Knows: Parenting

Racism continues to be an issue at the forefront of American culture. The notion of being colorblind does little to serve our nation’s children. Learn how to talk to your kids about race, Black History Month and the issues that affect their daily lives.

For a while, it seemed like being colorblind was a parenting virtue. It’s easy to suggest that as a parent, you’re teaching your children not to distinguish between skin colors. The fact of the matter is, people do notice skin color. Racism isn’t just something out of history books. Cultural and ethnic identities aren’t bad. As you raise your kids, don’t hesitate to talk about race and racism. It may feel awkward or intimidating, but you need to be honest with your kids about the world we live in and the need for change.

Consider your own behaviors and beliefs first

It takes self-awareness to talk about race, or any other important issue, with your children. What have your experiences been? Has your ethnicity given you more or fewer opportunities in life? Have you experienced discrimination? “Before talking to your children about racism, parents need to take a hard honest look within to understand your own biases and categorizations,” says child psychologist Dr. Fran Walfish. If you’ve experienced privilege, try to recognize that without feeling defensive. If you have prejudices, consider why and make it a goal to avoid instilling those prejudices in your children. “Talk genuinely about the messages you were given by your parents and the values you are hoping for your children to share,” Dr. Walfish says.

People notice skin color. Your children, even very small children, recognize differences between themselves and others.

“If you pretend like no one looks different, you’re not doing your child any favors.”

If you pretend like no one looks different, you’re not doing your child any favors. Give your child the opportunity to talk about the physical differences between herself and others. “Then, have an open sit-down discussion with your child to explore what she thinks about people with different color skin,” Dr. Walfish says, “[People] who have more or less money or things than we have. Make the conversation a game of curiosity.” Talk about how people are different, but that those differences don’t make anyone more important or valuable than anyone else.

During Black History Month, your school-aged child will be taught about leaders and activists who have fought for civil rights and equality. Ask your child what he learned at school and talk to his teacher about what will be covered. Talk to your child about issues that don’t come up at school, including racism toward other races and ethnicities in U.S. history. It’s good to focus on the triumphs of those who have affected change, but it’s also important for kids to understand the adversities faced by people of color in our nation’s history.

Be honest about present-day issues

Don’t allow racism to be something tucked away in social studies books at your child’s school. Racism has not ended. It may seem harsh to teach your children that racism exists today, and in many indirect ways, but consider children who learn this lesson by being discriminated against. Discuss value with your children, focusing on the fact that no one human is more valuable than another. Talk about how racism is learned, often from parents, and that you don’t want your children to treat anyone with disrespect, fear or contempt. Race may not be a comfortable topic for everyone, but it’s a topic we can’t afford to ignore as we raise tomorrow’s leaders.

More Ways to Celebrate Each Other: